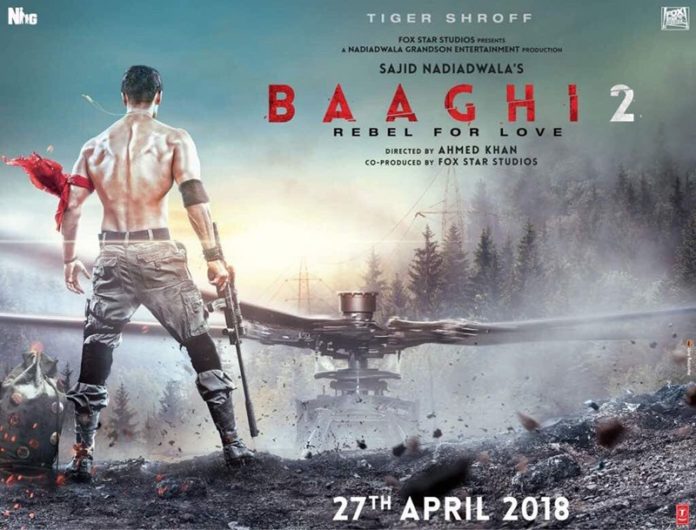 Baaghi 2 is a sequel 2016 hit action fill Baaghi which starred Tiger Shroff and Shraddha Kapoor. The first part was loved by the audience for some never-seen-before action sequences. Baaghi 2 poster suggest that the makers are raising the bar as far as the action game is concerned. The poster of the movie featuring Tiger Shroff reminds you of Hollywood action icons like Arnold Schwarzenegger and Sylvester Stallone.

The first part of the Baaghi series was based on the Telugu film Varsham starring Baahubali actor Prabhas with Trisha Krishnan. The movie was a huge hit with the lifetime collection of 77 crores. The main reason for its success was the action scenes filmed on Tiger and Shraddha. The first part was directed by Sabbir Khan, the sequel is being directed by choreographer turned filmmaker Ahmed Khan. Ahmed has earlier directed films like Lakeer and Fool & Final.

Tiger Shroff is the fittest Bollywood actor. He has always carried action roles with ease and with Baaghi 2, it seems that he will take a huge leap. Tiger has been training hard for the movie. The poster suggests that Baaghi 2 will be a big movie, especially for action lovers. The leading lady of the movie is yet to be announced.

To be produced by Nadiadwala Grandon and Fox Star Studios, Baaghi 2 will release on 27 April 2017. Tiger is currently busy wrapping up his next release, Munna Michael. Munna Michael also stars Niddhi Aggerwal and Nawazuddin Siddiqui.