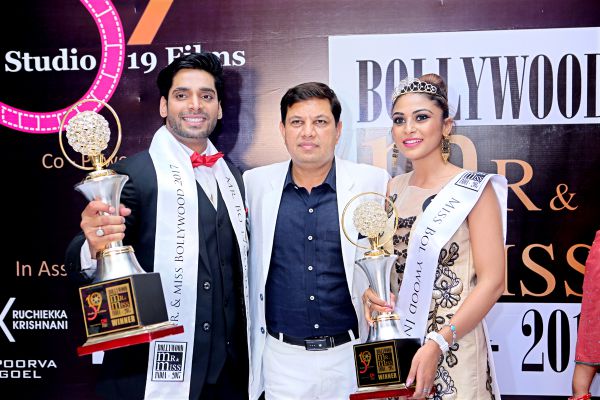 The winners who were crowned with the title are – Sarthak Verma from New Delhi for Bollywood Mr. India 2017 and Savina Birla from Chandigarh was crowned as Bollywood Miss India 2017. Actor Arbaaz Khan Jury member of the pageant said, “Every participant is special and holds the zeal to make it to the Bollywood. On being asked, what it takes to be a successful Actor, said dedication, focus, hard work, and talent is the key to become successful. He also wished Eid Mubarak to everyone.

On the occasion, Yash Ahlawat, actor and founder Studio 19 films said, “This is for the first time that a pageant is giving direct entry to Bollywood to the winners. He also said, being part of the Bollywood industry, I have closely seen extremely talented actors struggling hard to be an actor, especially from 2 tier and 3 tier cities and hence created this platform.

Ruchiekka Krishnani, CEO Studio 19 Films said, “Studio 19 Films is a major platform that is emerging to give wings to the dreams of young models and aspirants. With short films and ad projects, one can directly enter the silver screen. With Studio 19 Films, one will be properly trained and groomed for the screen tests.”

Bollywood Mr.& Miss India is a pageant with a fantastic opportunity for all aspirants to live their dream of winning a title and taking the first step for being recognized as a brand. This pageant conducts auditions in 64 cities, so that maximum aspirants get an opportunity to participate. An expert panel of choreographers, supermodels and celebs conduct the auditions, ensuring that no deserving candidate misses an opportunity to shine. Once the audition finishes, there is an extensive grooming session for the selected candidates for polishing them to show their true shine on Grand Finale in front of celebrities, bureaucrats, high profile dignitaries, page 3 & all the major media!