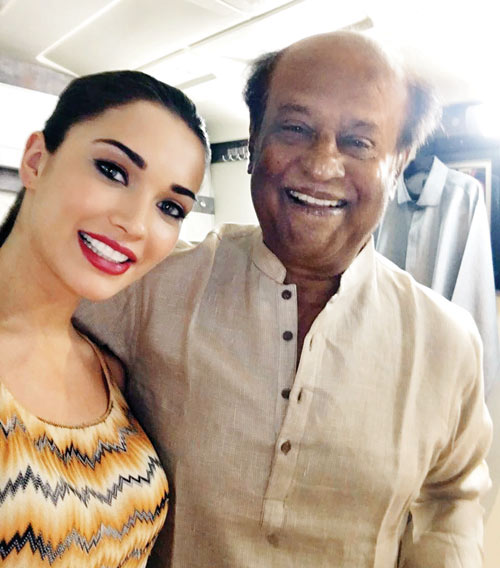 Robot 2: Amy Jackson to shoot the most expensive dance number with Rajinikanth. The song will be shot next month for 12 days.

While the fans are eagerly waiting for the release of Akshay Kumar, Rajinikanth and Amy Jackson starrer Robot 2, the makers are giving us more reasons to get excited about the film. Latest reports suggest that Rajinikanth and Amy Jackson will shoot a special song for the film. The song is touted to be the most expensive song of Indian cinema. Trade analyst Ramesh Bala tweeted, “@superstarrajini and @iamAmyJackson will be shooting for a peppy dance track for #2Point0 – 1 of the costliest songs with 12 days of shoot.”

“We have completed the shoot for 2.0. Only a song is left. Rajini and I are going to shoot for a 12-day song schedule next month. We are not travelling for the song, it will be indoors. There will be a huge set erected for the same, much like Shankar’s style. A R Rahman is composing the song which will have a lot of dancing and romance. It has a bit of both, but it’s going to be a dance track,” BollywoodHungama.com quoted Amy Jackson as saying.

The song is question will be shot in August and Amy Jackson has been asked to allot 22 days for it. The actress will rehearse for 10 days and 12 days are allocated for the song’s shoot. This special dance number will be choreographed by Bosco.

Robot 2 is the most awaited film of 2018. Not only Rajinikanth fans, but Akshay Kumar fans are eagerly waiting for its release. The trailer of the movie will be released on 12 Dec 2017 i.e. on Rajinikanth’s birthday. The movie will hit the big screens on 25 Jan 2018 and it expected to set the box office on fire.