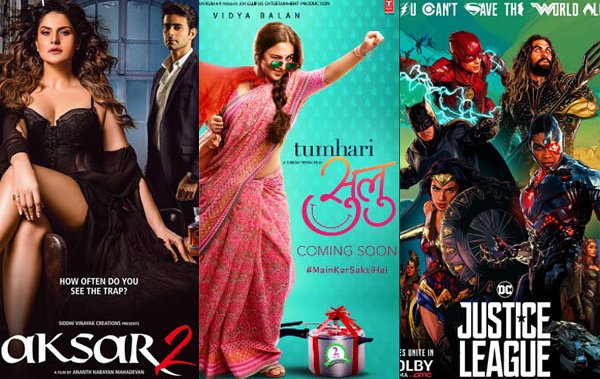 As expected, Vidya Balan’s Tumhari Sulu witnessed huge growth on Saturday. This was always expected as the movie received positive reviews from critics. The audience has loved the movie and this has certainly resulted in 60% growth on the second day. Zareen Khan’s Aksar 2 remains flat while biggie Justice League also failed to grow as per expectations. Here’ s a look at second day collection of Aksar 2, Tumhari Sulu And Justice League.

After an average opening on Friday with the collection of 2.87 crores, Vidya Balan’s film Tumhari Sulu witnessed a huge growth of 60.63% on Saturday. As per the numbers shared by Taran Adarsh, Tumhari Sulu earned 4.61 crores on its second day. The total collection of the movie stands at 7.48 crores.

With the positive reviews coming up, we can expect the movie to growth further on Saturday. The first weekend collection of the movie will be in the range of 12 to 14 crores. Made on a budget of 18 crores, the movie is already a profitable venture for the makers. It needs to earn 30 crores to be called a hit at the box office.

A sequel to 2006 hit film Aksar was also released on Friday. The movie has been delayed many times and this has certainly affected it. The audience lost the interest in the film and even the target audience was unaware of its release.

After a terrible opening with the collection of 0.8 crores, Aksar 2 remained flat on Saturday as well. The movie earned around 0.95 crores on its second day to take its total collection to 1.75 crores. The movie has been thrashed by critics and with no hopes of revival it will make it to the list of big flops of the year.

Hollywood biggies Justice League got off to a superb opening on Friday. It earned 5.5 crores on Friday. However, the movie remained flat on Saturday as it earned only 6 crores. While we were expecting good growth over the weekend, a flat Saturday is certainly a worrying sign for the film. The total collection of the movie after two days stands at 11.5 crores.