The emotional track has been sung by the versatile singer Sunidhi Chauhan. The song was launched at an event on Sunidhi’s birthday and she considers it as her best 31st birthday gift. The blend of the emotions with the perfect slow music is very soothing to the ears. The beautiful emotional song has been composed by Shashi Suman and beautiful lyrics of the song has been penned down by Prashanth Igole.

The songs describes the problems faced by the World Boxer Champion Mary Kom. The struggle in her life has been carefully described. The video of the song Adhure shows mixture of different emotions ending with a big smile. This emotional song is sure to mesmerize you with Sunidhi’s voice and the emotions roller coaster.

The song doesn’t actually require the video to be enjoyed. Just the soothing music with its hypnotizing lyrics are enough to make you feel good. Priyanka stuns us with every frame in the song and it emerges as the most loved track from Mary Kom after Dil Ye Ziddi Hai– which was the first song released from Mary Kom.

Mary Kom is a soon-to-be-released biopic on the Indian Boxer and Bronze Medalist Mary Kom. PeeCee has received positive feed backs since the launch of the trailer which was released on her birthday. Priyanka’s boxer persona has already been applaud. The PeeCee Maniacs are waiting eagerly to stun them just the way Priyanka did as Jhilmil in Barfi!

Directed by Omung Kumar and co-produced by Viacom 18 Pictures and Sanjay Leela Bhansali, Mary Kom will hit the theaters on 5th September. 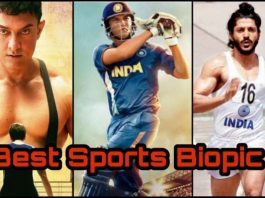