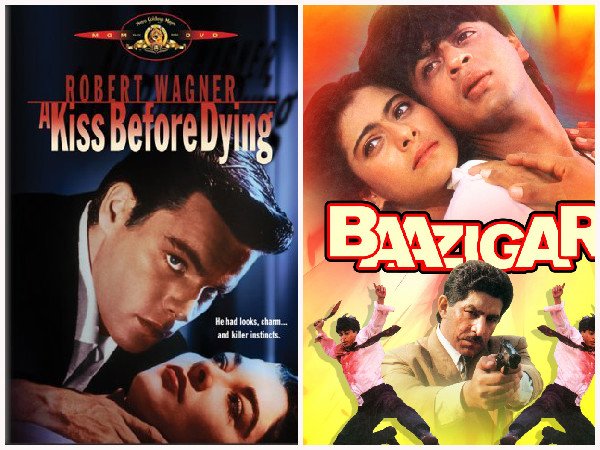 Bollywood has been suffering from a long time disease of copying movies from Hollywood. And it’s not just limited to a few films. There’s a long list of movies that are either inspired or copied to the last bit from a Hollywood movie. Here’s a list of 10 Bollywood movies you didn’t know were Hollywood copies. Loosely based on the Hollywood musical Seven Brides for Seven Brothers, Satte Pe Satta tells the story of Ravi (Amitabh Bachchan) and his six brothers. The brothers all live on a remote farm and are completely uncivilized — they detest bathing and eat and behave like the animals they live amongst. Though Satte Pe Satta only takes the basic premise and many choreographic elements from Seven Brides for Seven Brothers, it veers off to become its own story completely. Superstar Shah Rukh Khan’s superhit film Baazigar, a film which became a milestone in his career, released 22 years ago was an unforgettable crime thriller! But what you probably didn’t know is that this movie’s plot was stolen! Yes, that’s right. The story of Baazigar is similar to that of A Kiss Before Dying, a 1991 American crime thriller. Both the movies were equally amazing and completely deserve all praise. Kaante is a delirious Bollywood re-imagining of Reservoir Dogs complete with musical numbers. Though no points for originality will be awarded to Mr. Gupta’s screenplay about six Indian hoodlums who band together to rob the downtown bank favored by the members of the Los Angeles Police Department. But Kaante was also equally raw, exciting and deliciously different. As one of many Bollywood remakes of Hollywood films, Chachi 420 is a charming desi adaptation of the Robin Williams movie, Mrs. Doubtfire. While Williams brought his own special talent to the role of a divorced man who cross-dresses as a nanny to be close to his kids kept away by a court order, director Kamal Hassan’s Bollywood version is arguably much better than the original. And particularly the Indian twists in the story makes us wonder why the Robin Williams original didn’t have one or two of these subplots. Dushman is about two twin sisters, Naina and Sonia.  Sonia is brutally raped and killed by a postal employee. While her mother in an act of mental self-protection refuses to even think about the killer, Naina gets obsessed with searching the culprit. Eye for an Eye has a similar plot-line where a mother is caught in traffic while her daughter is killed. With revenge and exploitation on its agenda, the film galvanizes the mother into trying to settle scores with her daughter’s killer. Dushman is a very neatly inspired movie. Professional assassin Jeeva (Bobby Deol) reluctantly “babysits” Kiran (Rani Mukherji) who is a witness to her entire family’s murder by a druglord (Ashish Vidyarthi). Unsurprisingly, he falls in love with her while under his wing. Story-line is copied from Leon: The Professional. But still Bichhoo is a good movie. The story doesn’t go soft and dry, the songs are not much of a disturbance to the pace, and Bobby Deol is believable as a tough-as-nails, battle-hardened, cold-blooded hero for hire! Baghban is total a rip-off of the American classic Make Way for Tomorrow which released in 1937, decades before this film was even conceived. Baghban is the emotional story of the parents who had sacrificed their everything and had done many efforts that they can do to adorn the future of their children but their children doesn’t respect what their parents had done for them. This movie is a classic in itself. Abbas- Mastan took the general idea of Hollywood’s Disclosure, added a few songs and a righteous wife and voila! they had Aitraaz. Aitraaz is the story of Raj Malhotra (Akshay Kumar), happily married to Priya (Kareena). Raj works under Ranjit Roy (Amrish Puri) who’s young wife Sonia (Priyanka) happens to be Raj’s ex-girlfriend. Seeing Raj after five years, Sonia is again drawn towards him, in a purely lustful manner. Failing to get that, she accuses him of rape and asks her husband to remove Raj from the office. Raj, based on his innocence, decides to sue Sonia for sexual harassment. This movie was definitely a fresh concept in the block. The Miracle Worker tells the true story of Helen Keller, an Alabama girl born blind and deaf. Enter Anne Sullivan, a partially blind woman assigned the task of teaching Helen sign language. Anne begins the arduous process of teaching the girl the basics of the language. Black has the similar plot-line with Rani Mukherjee playing the blind and deaf girl and Amitabh Bachchan playing the teacher. Both movies are stunningly impressive pieces of work. Both Bluffmaster and Nine Queens are about two small-time swindlers, who team up and become involved in a con. As the deceptions and duplicity mount, it becomes more and more difficult to figure out who is conning whom, and we begin to ask ourselves, “Who isn’t a thief?” Bluffmaster scores because it is an entertaining con caper slickly told with the help of some excellent performances for characters that have been extremely well crafted.

It’s been ages and we are still copying and getting inspired by Hollywood. Time for some originality guys.

Do let us know about other Hollywood remakes in the comments section.