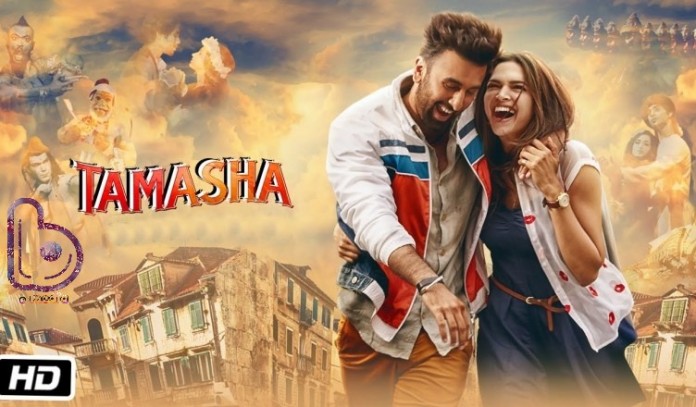 Written and directed by Imtiaz Ali, Tamasha stars the hit pair Ranbir Kapoor and Deepika Padukone in lead roles. Imtiaz is associating with A. R. Rahman for the third time after some brilliant soundtracks- Rockstar and Highway. Irshad Kamil pens the lyrics of all the songs. Here is our Tamasha Music Review-

Matagashti is a fun-filled song with a freshness that’s already made the number a favorite. Mohit Chauhan is good, but he could have been better. The song is a good listen, but it can’t be heard in a loop for long.

Eight years after delivering Mauja Hi Mauja, Mika Singh returns to sing for Imtiaz in Heer Toh Badi Sad Hai. This is also the first time Mika has sung for A. R. Rahman. The song is brilliantly sung and composed; it will be a definite chartbuster. We also look forward to more collaborations of Mika & Rahman.

Tum Saath Ho seems a little familiar but Alka Yagnik’s voice sounds surprising young! Rahman has even blended his personal favorite Hindustani Raag Desh. Arijit Singh lags behind the sweet voice of Alka. ‘Agar Tum Saath Ho‘ is a soulful rendition that will grow on you.

Arijit Singh and Sashwat Singh have sung Wat Wat Wat excellently. This song reminds us what Rahman is capable of. The core is Punjabi though the lyrics sound Bhojpuri, and there’s shehnai in the background. Only Rahman can make it all work! We love the song already.

Chali Kahani is a surprising change of pace in the soundtrack. Excellently sung by Sukhwinder Singh, nicely complimented by Haricharan and Haripriya, the song is a kind of tell-tale number. Maybe it will be used during one of the Tamasha in the movie.

Safarnama is a beautiful spiritual journey song. Lucky Ali’s voice seems perfect for this kind of song. The acoustic guitar and trance-like chord progression throughout the song make it one of the best songs to be heard while traveling. Not to forget the amazing, thought provoking lyrics of Kamil.

Parade De La Bastille is an instrumental number that is a fusion of the Far East and Middle Eastern musical worlds. The song borrows some music from Matargashti also. It is quite evident that A. R. Rahman has composed this number from his heart.

There’s also a bonus track in the form of a remix of the most fun song ‘Wat Wat Wat’ in the album. Though we enjoyed the original more, this remix is not bad either.

A. R. Rahman himself has lent his dreamy voice to Tu Koi Aur Hai. There is a minimalistic use of music instruments. Alma Ferovic and Arjun Chandy form the backing vocals. The song beautifully transitions into a chorus of the opening lines of Safarnama. A lazy but adorable track.

Tamasha Music Review | Final words and Verdict
After Rockstar and Highway, Imtiaz Ali and A. R. Rahman’s collaboration has again given us some incredible tracks. There is freshness in the album; some songs will get you glued immediately while some may take some time to grow on you. Overall, Tamasha’s soundtrack is A Fresh Change of Pace!