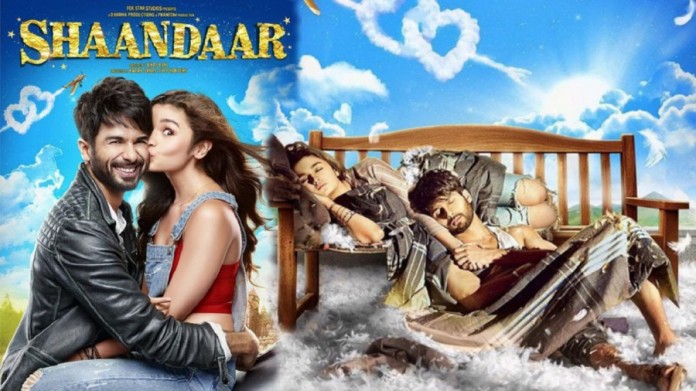 Shaandaar Movie Review by Bolly Arena – Shahid Kapoor and Alia Bhatt’s adorable chemistry is the major highlight of this romantic comedy. The technical work is excellent and with a better story it would have been a visual treat. The music by Amit Trivedi is very good and works well in the film. All the songs have been picturized beautifully. Shaandaar is not everyone’s cup of tea. The majority of the audience will find it boring. Though it will have some appeal in urban multiplexes.
Rating – 3 stars
Visit Bollyarena to read the complete review.

Shaandaar Movie Review by Filmi Beat – Well, personally, after a long time we have seen such a feel good movie that entertains you and brings a smile on your face. Shaandaar is exactly like Queen, in a way that there is not many faults to pick at. Overall, the movie is so good that you would rather ignore the little flaws and enjoy this movie in a Shaandaar way.
Must watch movie people! Shaandaar is everything that you need this weekend, so don’t miss watching it in the theaters with your loved ones by your side!
Rating – 3.5 stars
Visit Filmibeat to read the complete review.

Shaandaar Movie Review by Itimes- Sahid and Alia’s chemistry is just unmatchable.  And since this was Shahid’s first movie after he got hitched, he looked all the more appealing for he is now unattainable. The story is fun, simple, funny, witty and oh there’s one scene where all of them except Shahid are high on mushrooms and brownies, and trust me it was a complete laugh riot. In fact, not just Shaihd-Alia chemistry is worth a thousand whistles but even Shahid-Pankaj and even Pankaj-Alia on screen chemistry is incomparable. Now after all this do I need to give out the rating or can you guess? Of course it’s a 4 out 5 stars. It is definitely a must watch, and yes more than once!
Rating – 4 stars
Visit Itimes to read the complete review.

Shaandaar Movie Review by Saibal Chatterjee from NDTV- Shaandaar is a fun film that is infused with great charm, which in turn is enhanced by director Bahl’s panache for a light touch, an attribute that was on full show in Queen. While it does not live up to its title as a package, it fulfils much of the expectations that the audience might have from a film produced jointly by Karan Johar on the one hand and Vikramaditya Motwane and Anurag Kashyap on the other. It brings together two different worlds and succeeds in striking a balance between the two. For that, and for much else, Shaandaar deserves hearty ovation.
Rating – 3 stars
Visit NDTV to read the complete review.

Shaandaar Movie Review by Bollywood Hungama- SHAANDAAR has a fairy tale kind of feel to it with lots of VFX, animations, exotic UK locations and big expensive sets. The film is very high on glitz and glamour. It is a larger than life film, with funny and quirky characters and to a large extent, that does the trick for the film. On the whole, SHAANDAAR is a feel good movie that will make you leave the cinema hall with a smile on your face, despite its flaws. It will mainly appeal to the youth who seem to be the target audience for the film.
Rating – 3 stars
Visit Bollywood Hungama to read the complete review.

Shaandaar Movie Review by Rediff- Shaandaar’s charm lies in Bahl’s treatment, employing SFX and animation in abundance, which is perfectly timed and enhances ordinary seconds into attractive ones. As one of the characters quizzes, why must we do everything out of necessity, why can’t few things done for the fun of it, Shaandaar is simply fun, fun, fun and frothy enough to pull it off.
Rating – 4 stars
Visit Rediff to read the complete review.

Shaandaar Movie Review by Koimoi- Shaandaar is different from his other flicks alright, but it’s far from being brilliant. Bahl’s scenes are seen falling flat most of the time, and he isn’t even able to whip out something to keep us captivated during the boring parts. He however succeeds in bringing out the best from his actors. He and the ever so impressive Anil Mehta deserve credit for capturing some jaw dropping locations as well. The film would have received a lot of help if some of its songs and unneeded sequences were chopped off
Rating – 2.5 stars
Visit Koimoi to read the complete review.

Shaandaar Movie Review by Bollywood Life- It’s a visual delight. But the film hardly has a story. It’s just an ongoing process where a few subplots are added to heighten excitement but after some time you just don’t care. It drags in the first half as well but a deliciously hot Shahid saves the day but how long can the shine blind you. The second half stretches frighteningly, threatening to exhaust you. Despite watch this film this festive weekend because it’s been sometime since we saw a KJo embellishment onscreen.
Rating – 2.5 stars
Visit Bollywood Life to read the complete review.

Shaandaar Movie Review by Indian Express- Take a blank canvas. Daub some ‘Orphan Annie’ paint on it. Add a little dash of ‘Cinderella’. Come closer home and borrow from that old durable ‘Hum Aapke Hain Kaun’, and the much more recent ‘Dum Laga Ke Haisha’. And gild the whole with glitter and gold. What ‘Shaandaar’ is trying to do is clear: reinvent beloved fairytales with the help of winsome stars, but ends up being a blinding mix of everything with nothing of its own to boast of.
Rating – 1.5 stars
Visit India Express to read the complete review.

Shaandaar Movie Review by Mid Day- The story lacks imagination, the screenplay is shoddy and the dialogues unfunny. Some humour goes unlaughed at and rest goes undigested. For instance, there’s a scene where it is hinted that a respected business magazine takes money to put people on their covers, and another one when a young lad sets his grandma on fire.
Rating – 2 stars
Visit Mid Day to read the complete review.

Shaandaar Movie Review – Our recommendation
Well, most the review has been positive for Shaandaar. The movie is a visual delight and you will surely love Shahid and Alia’s chemistry. Despite, all its flaws Shaandaar is a decent watch this weekend. This one is for bubbly shubbly janta.

Bookmark this page as we are coming with more reviews. If you are watching Shaandaar, please share your reviews with us in the comments section.

Also Read – 5 reasons we are excited about Shaandaar