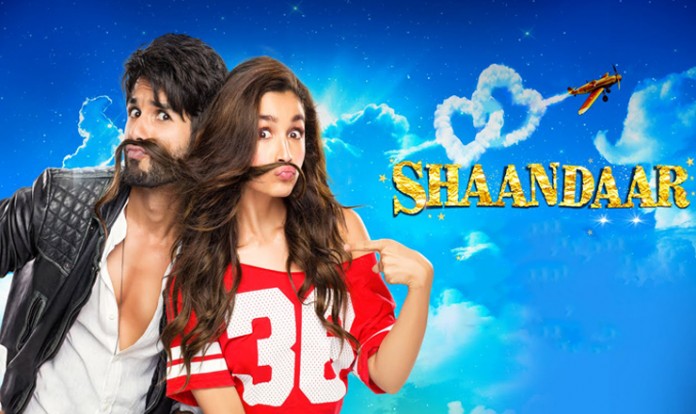 Shahid Kapoor and Alia Bhatt starer ‘Shaandaar‘ is all set to hit the theaters on 22 Oct 2015. Directed by Vikas Bahl, Shaandaar is India’s first destination wedding film. Let’s have a look at the opening day, opening week and lifetime Box Office prediction of Shaandaar.

The movie has created a huge hype and buzz before its release especially among the youngsters. The trailer of the movie was well received by critics as well as the audience. Shahid and Alia’s crackling chemistry is one of the hottest topics these days in B-Town. The promotion has been top-notch from the marketing team. Shahid and Alia have been going places for the promotion of the movie. They have been everywhere from colleges to events to radio stations to parties and festivals. The music of the movie is a big hit. Songs like Gulaabo and Shaam Shaandaar are already in the chartbusters. Overall, everything seems to be perfectly placed as far as hype and buzz surrounding the movie is concerned.

Also Read – 5 reasons which make us excited for Shaandaar

Positives
1) Huge hype and buzz.
2) Shahid and Alia’s crackling chemistry is the main highlight of the movie.
3) Release Date – No big competition at the Box Office till the release of Prem Ratan Dhan Payo on 12 Nov 2015.
4) Family entertainer – Though targeted mainly to youngsters, the movie looks like a perfect family entertainer.

Negatives
1) Budget of the movie is big.
2) Too much expectation – Frankly speaking viewers are expecting too much from Vikas Bahl which may go against the movie.

Everything seems to be perfectly placed for Shaandaar. Considering, all the above points we can easily predict that Shaandaar will get one of the best openings of 2015. This will be the highest opening day grosser for Shahid Kapoor and Alia Bhatt. The movie will perform best in multiplexes driven centers and metros like Mumbai, Delhi, Gurgaon, Hyderabad, Pune and NCR. If the content turns out to be good then Shaandaar has three full weeks to dominate at the Box Office till the release of PRDP. As per my prediction, after a superb opening day of around 15 crores, the movie will make it to the 100 crore club.

This is my Box Office prediction of Shaandaar. You can also have your views in the comments section.