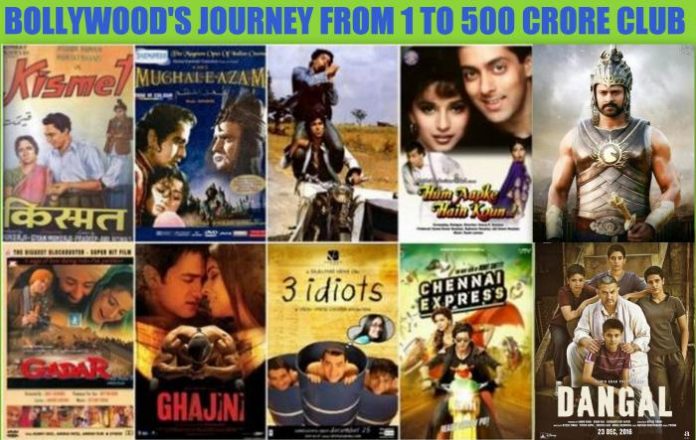 It’s the year 2017 and today when we think about a successful Bollywood movie, we count the number of crore it has earned. The movie has to earn at least 100 crores to be counted as being successful at the box-office. While it is quite easy for movies to rake in 100 crores in today’s time, have you ever wondered which movies were the first ones to start the crore club of Bollywood?

Let’s find out with the list of movies that started the different denominations of the crore club of Bollywood. Have a look at Bollywood’s journey from 1 crore to 500 crore:

Ashok Kumar was one of the biggest superstars Bollywood has ever seen and his movie Kismet was the first movie ever to make an amount of 1 crore at the box-office and that too in the year 1943.

After waiting for a hiatus of 17 years, Mughal-e-Azam became the movie which broke Kismet’s record and made an amount of 5 crores at the box-office. Prithviraj Kapoor’s epic drama is still considered one of the finest movies’ ever made.
3. Sholay (1975)

Ramesh Sippy was the next movie in line to break all the past records when it comes to doing good business. The movie became the first one to earn a total of 10 crore as well as 15 crore.

Salman Khan and Madhuri Dixit spread their magic on the big screen and how! Their movie was able to break Sholay’s record by earning 25 crore and then eventually a total of 50 crore. A blockbuster in every sense of the word!

Sunny Deol’s Gadar still holds the record of being his biggest hit till date. The movie broke many records and one of them was a total collection of 75 crores.

Aamir Khan came to be known as ‘Mr. Perfectionist’ ever since he started giving his all for each of his film like Ghajini. The movie’s unique story and Aamir’s dedication for the film resulted in a massive collection of 100 crores. Ghajini was the first film to enter the 100 crore club in Bollywood.

All the landmarks that lied between 100 crore and 200 crore were completed by Aamir Khan’s 3 Idiots. The movie did not stop at 125 crore or 150 crore and neither at 175 crore, instead it jumped up to a total of 200 crore only.

Shah Rukh Khan’s Chennai Express was able to tickle the funny bone of the viewers and also in loosening up their pockets. The movie earned a total of 225 crores at the box-office.

Dhoom 3 broke Chennai Express’s records by collecting a total amount of 275 crores. It looks like Aamir Khan had decided that he will be the one to make and break records.

Aamir Khan yet again inaugurated another box office club of Bollywood as his movie PK became the first Bollywood movie to cross 300 crores mark. The movie eventually earned 340 crores and remained the highest grossing movie of Bollywood till 2016 when Aamir Khan’s another release Dangal went past it.

Aamir Khan’s latest release Dangal was loved by everyone. The movie received huge appreciation from the audience and went on to cross 385 crores in India. It is currently the highest grossing movie in India with the lifetime collection of 387.5 crores. Who would have thought that a Hindi version of a South Indian film will become the pioneer of Bollywood’s 400 crore club? Well, 400 crore wasn’t enough as the went on to cross 450, 500 crores.

The audience is now waiting for the first 500 crore movie. Well, it looks a daunting task as we think that even crossing a 500 crores mark will be an uphill task for a Bollywood movie in the next 2 to 3 years. Bollywood needs to come up with something magical and big like Bahubali 2. We have to wait and watch.